Many moons ago, an article in Third Sector Magazine discussed the need for more competition within the Charitable Sector.  The jist of Joe Saxton’s column was, competition is good for companies, smaller charities have lower overheads, and merging charities is rarely a sensible idea.  All this makes sense, but for me there are two major issues:

Macmillan Cancer support (like all charities) submits information to the Charity Commission every year.  In 2015, they spent £65.58 million on “Generating Voluntary Income”, initially that seems like a ridiculously large amount.  However, their voluntary income was £214.9 million, so maybe that’s actually a really good return? How does one know whats good and whats bad?

This is where my master plan came in!  An easy to use comparison for charities.  How has no-one thought of this before?

Albany Road in Roath is home to 11 charity shops along half a kilometre of road.  The perfect (maybe) density of stores to drive healthy competition.  The contenders are:

I chose seven categories for comparison:

After some time with spreadsheets I came out with these results***: 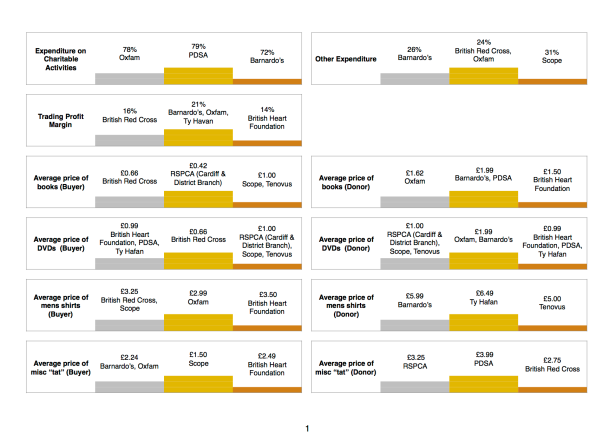 There are loads of other categories I could have looked into (maybe I will some time).  For the time being I think these results show a quite interesting difference between charities, maybe its worth walking a few extra meters to shop or donate.

Until next time, if you want to, well I don’t even know what I’ve shown here, but, hire me?

*Accounts do not show suitable level of detail for comparison

**Average of highest and lowest priced item on display

*** Results are based on the most up to date accounts submitted to the Charity Commission and the prices of items on 06/05/2017 ignoring any special offers.

One thought on “Competing Charity Shops”

Preach it Jezza C #Truth #JeremySpeaksForMe
Shocker! Pretty pleased with my neighbours in the liberal left #PoliticalCompass #Liberal #Pinko #Leftie
Obviously the government would never mislead us, but I can’t help thinking of that can and may difference. #TheyreProbablyLying #Words #Covid
So I bought some scales, I’m not sure if it’s a coincidence or if they’re official merchandise or what. #ConAir #NickCage #Weight #BasiclyMyTwin